Kick back in a hammock and chill with the latest issue of Midwestern Gothic. 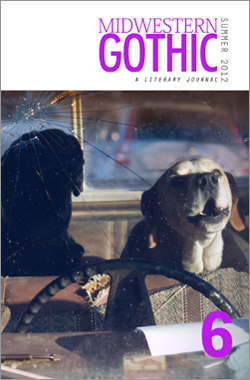 Honestly, this is probably my favorite cover. I can hear those dogs whining and howling in my head – awesome. The guts of the book are pretty sweet too. The story that stood out most to me in this issue was Makeup by Hadley Moore. It’s about a woman, marred with a wine stain birth mark, and a gift of cover up makeup from her well-intentioned mother.

Anne Marie hadn’t worn makeup in nearly thirty years. The last time, she was ten and had filched some cheap drugstore stuff from her parents’ bathroom. She’d glopped it on and walked down the street to the playground. She wanted to see what it was like to be out in public as a different girl, a regular girl.

A boy from her class was sitting alone on a swing, and Anne Marie sat down next to him. “Hi,” she said. “I’m Laura.”

He looked at her. “You’re Anne Marie.” He paused. “And you’re still ugly.”

Since then that was the only kind of attention she could expect from boys— and now men—not cruelty, just this matter-of-fact disregard.

The story explores a lifetime of layered judgements upon the main character, to the point where it stifles her, and deftly introduces a new layer in a way that forces her to see herself in a new light. All in all, loved it.

See who else contributed to the issue and pick up a copy or eBook for yourself. Go to the book’s page on Midwestern Gothic