Yearning to recapture something you lost, long, long ago? 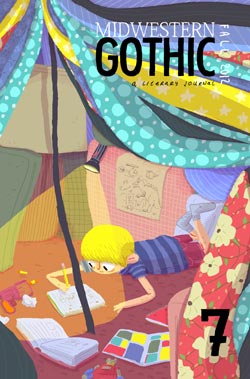 Isn’t everyone? Issue 7 (Fall 2012) of Midwestern Gothic helps you do just that! We’ve had this special issue of Midwestern Gothic in the works for a long, long time, and I’m incredibly excited to unleash it on the world. We love publishing contributors in Midwestern Gothic more than once, and that’s never been more true than in this issue. We reached back out to a lot of our favorites from our still-fledgling six issue history, and just about everyone gave us something back that we loved. And we’ve got some fresh blood, new contributors to throw into the mix, and they’re no slouches either.

One of my favorites, though, comes from a past contributor, Abby Norwood. Anytime anyone asks what my favorite story is, I’m able to tell them without question it’s her short, “Spider on the Wall,” (Issue 4). When she submitted again, I had high hopes and high expectation, and again, she floored me. What she does with characters and emotion just hits a nerve with me every time.

In Issue 4, it was focusing on a woman going through postpartum depression, which changed the way I look at my wife. This time around, her short story “Soapbox DeLorean” looks in on a young boy rebuilding a soapbox racer in the absence of his late-father. Everything she’s submitted hasn’t exactly been bright and cheery, but it’s been phenomenal all the same. Here’s an excerpt:

Bean sat naked on the edge of his bed—naked as a baby bird, his mama would say if she saw him, but Mama was lying in her own bed with a wet cloth on her forehead and the shades all drawn, and like that she couldn’t see a thing.
He’d ridden home from the funeral on Mama’s lap and while Aunt Dee made Mama some tea he’d slipped into his bedroom and out of his black suit. He’d balled it up and thrown it in the trash, the whole thing—jacket, slacks, dress shirt, Transformers briefs, clip-on tie. He sat there naked and put his fingers over the bruise on his upper arm. Five bruises, really, one from each of Daddy’s fingers squeezing Bean hard when he’d spilled juice on the carpet a few days before.
Bean held his hand over the hand-shaped bruise and looked at the pile of funeral clothes in the trash. Daddy hadn’t liked to wear things like that and he got too dirty at the refinery for suits, but sometimes he’d dress up for a job interview or a wedding. After Mama’d gone to bed the past two nights Bean had snuck into her bedroom and he’d pulled some of Daddy’s sweaters and slacks and undershirts onto the closet floor to sleep on. Kind of like the little nests Daddy’d build on the floor next to his bed, the piles of blankets and pillows, a safe place for Bean to sleep when the thunder from a summer storm grew too loud or the lightning too bright. Bean’s nest in the closet wasn’t as soft, but it smelled like Daddy, like Old Spice and sandalwood and whiskey. He’d buried his face in the sweaters and folded himself up to fit under the tees. The smell helped Bean sleep.

Grab yourself a copy of Issue 7 and check out the rest. You won’t regret it!