A new year, and that means a new issue of Midwestern Gothic. 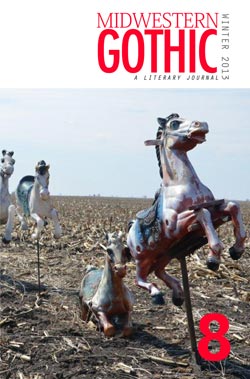 Issue 8 (Winter 2013) of Midwestern Gothic might just have my favorite cover so far – the image of the Cornfield Horses from David J. Thomspon is one of those unique shots that we just couldn’t ignore. It’s a little bit whimsical, and a lot weird, but that’s what makes us love it – just like we love the Midwest. Once you get past that and into the guts of the issue, there’s still plenty of whimsy, weird and stuff you won’t find anywhere else but the Midwest.

One of the pieces that stuck with me the most in this particular collection was Michelle Webster-Hein’s “Pictures of Pictures.” In it, Helen takes photos of the memories of her friends who all live far more interesting lives than she does. It catches up to her when she tries to win the affection of the man who develops her photos. Webster-Hein’s Helen is pathetic, but there’s a bit of her in myself, or anyone who’s lived vicariously through another’s experiences rather making something happen for themselves. The endearing characterization brings to life a common thread among Midwesterners, who often find themselves stuck in place with no first-hand knowledge of what lies beyond the outer borders of their personal purview. Here’s an excerpt:

The next day Helen purchased a mini tape recorder and a package of mini tapes and stopped by Gertrude’s house.

“Tell me about Europe,” Helen said, and she turned on the tape recorder.

“What do you want to know?” Gertrude said.

Helen shrugged. “Where you’ve been, what you did there, how it felt.”

After she left Gertrude’s with two full tapes, Helen stopped by to see Miriam, who had lived in France, and then dropped in on Jeanette, who had spent some time in Italy.

Over the next three days, Helen replayed each tape over and over and jotted down key notes on a pad of paper. In front of the mirror, she practiced certain
phrases and retold favorite anecdotes, replacing husbands with friends.

“A few years ago in Paris,” she would say and would then flip her wrist in what she hoped was a nonchalant gesture. These introductory phrases she practiced over and over until they sounded matter-of-fact. “The last time I was in Italy,” she’d say, or, “When I first spotted Tallinn from a distance.”