There’s a new issue of Midwestern Gothic, and it’s a beaut. 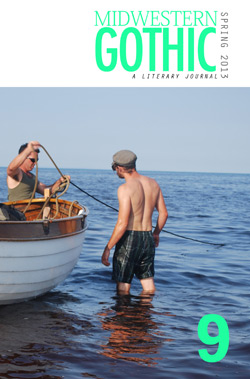 Issue 9 (Spring 2013) of Midwestern Gothic marked a bit of a change for us – I’m not entirely sure what caused it – but our submissions doubled this time around. After a few days I thought it might be a fluke, but as they continued to roll in, it quickly became obvious we had a lot more to sift through than we usually did. The net result of that – we got a lot of good stuff. We had to turn down a lot of good stuff. I met one of the people we rejected at AWP this year, and she asked what she needed to do differently, and I said, “Nothing. Submit another story with that same aesthetic and energy – this time around we just got another story about a similar subject that we liked better.” Uff. A great problem to have, and we definitely ended up with a strong issue because of it.

Probably my favorite of the bunch was a story that meanders to the edge of what we usually take. If a story or poem has surreal elements or is too strongly genre, we’ll typically use that as a way of cutting down the submissions. “The Sting” by William Blomstedt, is very Kafka-esque, in that it deals with a man’s partial transformation. The gist of the story is, a sexually frustrated and inept beekeeper gets stung “down there” and suddenly has ever woman in the small town he lives in knocking on his door. There were quite a few chuckle-worthy moments in the story, and I loved watching the character go from uncertain loner to sexual dynamo in such a ridiculous manner. The danger with a story like this is that it becomes trite or too far-fetched, but Blomstedt struck an excellent balance, and the whole piece has a light-hearted clear voice that makes it a joy to read. Here’s one of my favorite passages:

Bees never seem to know what to do after they have stung someone. It is, after all, a unique event in their lives. A bee’s stinger is connected to the organs in her abdomen. The barbed stinger enters the victim’s skin and it gets wedged like an arrow in the dermal layer. When the bee pulls away from her victim, the stinger stays in the skin and the bee’s stomach and other vital organs are ripped out of the exoskeleton. This trait was evolutionarily selected because it allows the bee’s venom sac to continually pump poison into the predator after it has been separated. The bee dies with the honor of offering her life in the defense of her home and family. Jake always found this fascinating: hive mentality at its finest.

This bee on his arm was going through the confusing transformation from a working member of the hive to a martyr. With her fluttering wings and body spinning around in circles, she reminded Jake of a little, living tether ball. Jake watched the insect in curiosity and sadness. What, if anything, was going through that little bee’s mind? Was she satisfied that she had fulfilled her purpose in life, having done her best to drive this honey-stealing devil away? After a few seconds, her inner organs gave in to the struggle and she pulled her body free, leaving a small trail of yellow gunk along Jake’s arm. ‘What in the world does that feel like?’ Jake wondered as the bee walked a few steps and then stopped to clean her antennae.

This bee could live for another hour but would eventually stop flying and die alone in the grass. Ants or other small insects would dismember the body and eat it, or it would just decompose into a small, smelly mess. Jake decided to aid the process and flicked the bee, sending her flying out of the truck into the high grass. He pinched the stinger out of his arm, which had already started to turn red and form a welt. ‘Well,’ he thought, ‘two stings on the day so far. Let’s see how many more it will be.’ Jake took his veil and gloves from the passenger seat and began to suit up, preparing for the ordeal ahead of him.

Buy a copy of Issue 9 and get acquainted with more emerging and established Midwestern writers.