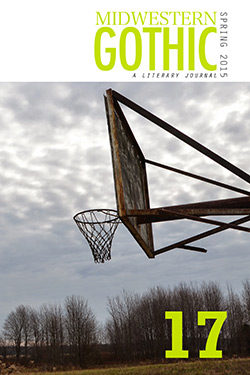 The Spring Issue of Midwestern Gothic marks our entry into Year 4 of the journal, since we launched issue 1 in spring of 2011, this particular time of year serves as an anniversary of sorts and a marker of how far we’ve come. When folks ask at bookfairs if we’re new, I typically tell them that we’re not old, but not new either. I’m not sure when I’ll stop thinking of ourselves as a new entry to the lit scene, but it’s probably fast approaching.

It’s also interesting to me how different trends emerge as we put an issue together, and the trend that stood out to me this time around was how much short, short fiction we got. In a way, this almost feels like a flash fiction issue in that we received and selected more compact, powerful pieces of narrative than usual. One of my favorites from the issue was “Psychiatrist” by Corey Mertes, a short fiction about a strained relationship including a titular drinking game, which culminates in a pointed question designed to reveal a marital affair. The story examines the lead up to this moment from which there’s no going back and the fallout afterword in a way that perfectly captures the tension, second guessing, and “no going back” moments associated with decisions that come to define people. Here’s an excerpt:

She asks more questions. Rob replenishes drinks after everyone changes places for the third time. Allie thinks: Sometimes they tell the truth, other times they lie; sometimes they get up and move, and sometimes they don’t. Once in a while someone says “Psychiatrist,” but just as often they remain silent. She notices Suzanne can’t stop eating snack food and wonders if it is part of the game.

They change places after a lie, she notes, but not always—they move after the truth sometimes too. Where do they move to? Damn it! She hasn’t paid any attention to that. Now she’s really confused.

“Don’t be such a prude, Allie,” Greg says, after they’d been playing the game for half an hour. “Open it up a little.”

Everyone is laughing and having a good time except her. She tries to play along, to act the good hostess despite everything. Rule 6: Don’t be afraid to step out of your comfort zone. She asks Kristina when she lost her virginity, Andrew how many men he’s slept with. His response—fewer than fifty—evokes a selfcongratulatory chuckle from Travis, to his left, “Psychiatrist,” and then howls of laughter as everyone changes places again. Allie’s frustration escalates with each round. Why doesn’t Rob sense her alienation and come to her aid?

for the rest of the story, and many others inspired by the Midwest.